They cannot always be good.

(The protagonist in a washroom)

Red Faction is one of those games that you don’t think of any more. When it was published it was all the rage, due to its destructible environment and interesting plot. The protagonist, Parker is a miner on Mars. He soon realizes that his employer, the Ultor Corporation is treating their workers like prisoners. The first stages of the game are set in a mining complex, and the barracks resemble a jail pod, rather than living quarters. The Ultor Corporation is discovered to be engineering a plague that is inflicting massive fatalities on the people of Mars. Parker in the first level finds himself caught in an uprising. Finding himself caught in the cross fire, Parker decides to take up arms. And the arms are really the only good part of the game anymore aside from the soundtrack.

In the first stage, Parker Uses a riot baton to obtain a decent weapon: a 12.7mm pistol with 12.7mm cartridges. The pistol behaves more like my beloved SP2022 with its sixteen round double stack magazine, but I digress. Oddly enough, the pistol is equipped with a silencer. I don’t really see the need of the Ultor Corporations’s Security Force who are engaged in asset protection (protection of the mine and preventing workplace violence) to have silencer. To me this was odd. 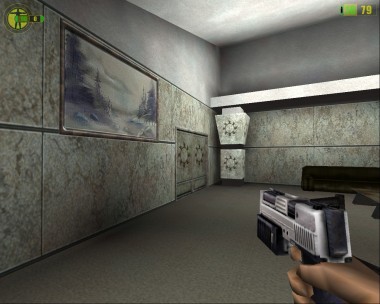 The levels are slightly maze like with the destructible environment, but this wasn’t really used to its full potential. I recommend you give the game a chance to see this for yourself as I don’t want to reveal too many spoilers. Frankly, the game gets boring after the undercover operation where you apprehend the deputy administrator of Ultor’s operations on Mars. The submachine gun was my favorite weapon it is acquired when the player engages the executive protection unit guarding the deputy administrator.

The gameplay is decent, but dated. The player is engaging targets at long distances, and medium distances and it would help if more weapons had some kind of zoom function or aiming assist instead of just a tiny crosshair. The atmosphere is decent, the levels feel like industrial facilities and office buildings.

The soundtrack composed by Dan Wentz is another bright spot in the game. It feels Jan Hammer inspired at some points. Again, I cannot say too much about the game, I did complete it two years ago. I decided to call it quits though as I’ve got better and more important things to do than spend time on a game that was once good, but is now a dated time waster entrenched in mediocrity.

The straw that broke the camel’s back was the poor AI, really. The deputy administrator was a poor principal to protect. He ran right into his own forces’ gunfire and die. Leaving me with the perfect game over crawl.

So, why don’t you try this game? See if your opinion differs from mine. You may enjoy it. I lost interest fast.