All in The Family Part III: Alvin P. Hovey: A soldier-statesman 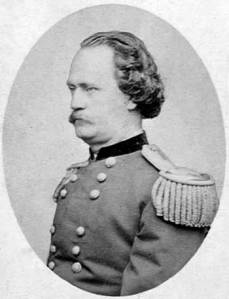 Author’s Note: Thankfully in the 19th century record-keeping, and archives were more accurate than sources I’ve dealt with in prior installments in this series. I used several excellent secondary sources, with some of Hovey’s own reports from the battlefields of Champion Hill and Vicksburg. Regretfully, I do not have the time to complete a comprehensive biography of Alvin Hovey. What I can author is a series of highlights from his formative years, military, and civilian professions.

The American Civil War was a tragic four year affair in American history. Brother was against brother, fathers fought against their sons. Two worlds collided: an agricultural south and an industrial north, a free north, and a south that would not lightly eschew its tradition of slavery that was rooted in their plantation system of agriculture. These dialectics polarized America long before Henry Clay’s great compromise. They had reached the boiling point in 1861 with threats of secession becoming actions. The south was now against the north.  One man from Indiana, the subject of this essay like many joined the Federal military to defend the Union that Andrew Jackson declared worth preserving.

Alvin Peterson Hovey was born in 1821 in Posey County Indiana. His youth was troubled and his father passed just before his second birthday. His mother passed at age fifteen. As the youngest child amongst two other children his prospects were few, as this was the 19th century. There was not much of a social safety net in existence. As a teen he worked in a general store as a clerk. In his spare time he read English poetry. He had greater ambitions though. A correspondence began between Alvin and a prominent attorney: John Pitcher (Lang, p1, 1952).

The correspondence was to no avail. Hovey waited weeks for a reply. Again, no success was gleaned from it. Hovey paid a visit to Pitcher’s law office in Mount Vernon, Indiana to ask him for permission to use his law books to begin the study of law. Pitcher gave an affirmative reply. Yet, spoke on how the legal profession demanded hard work and talent. Despite the judge’s admonitions and caveats on how this career was not an easy one, Hovey passed the bar within three years in 1843. He was twenty-two years of age (Lang, 1952).

Hovey found his first military role in the Mexican War. This conflict with Mexico was the crucible and proving ground for many commanders for both the Union and Confederacy. Hovey was a first lieutenant under his father-in-law, Captain Enoch R. James. This company was going to be attached to the 2nd Indiana Regiment. Due to manpower quotas being fulfilled this company from Posey County, Indiana never made contact with the opposing force during the war.

After Hovey’s first military service he entered politics. He served as a delegate to the Indiana Constitutional Convention of 1850. This in turn led to a career beginning. The following year he transitioned from a member of the bar to a member of the bench as a district judge. In three years time he served on Indiana’s supreme court. In 1856 he was appointed US Attorney for the district of Indiana (Lang, 1952).  For more information regarding Hovey’s career in politics visit here.

In 1861, the Civil War had begun and the call for troops was issued. Hovey was commissioned a full colonel and became a brevet (temporary) major general later in the war. A google search of “Alvin Hovey’s battles” yields 156,000 results. The recurring theme and name within this google search is Champion Hill which took place in the western theatre of the war at Vicksburg.

The city of Vicksburg, Mississippi was a vital trading center in the south, therefore a vital link in the Confederacy’s supply chain. It was a confederate stronghold on the Mississippi river, and its capture would not only provide a clearer path to New Orleans for Union forces, but it would also be a backdoor for William Tecumseh Sherman’s March to the Sea. Its capture was also important for political reasons.

“Vicksburg was just as important to the Union war effort as it was to the Confederates. President Lincoln, always concerned about maintaining his political support in the Midwestern states, was fully aware of the Mississippi’s importance to the farmers of that region. One of Lincoln’s worst fears was that those states might seek an accommodation with the Confederacy if that was the only way they could gain access to the vital waterway. Opening the Mississippi was the most important war aim for many Unionists in the Midwest (Gabel, 9, 2013).

The Union campaign to take Vicksburg began in Cairo, Illinois where General Ulysses S. Grant, Hovey, and others in his Army of Tennessee set out on US Navy gunboats to reach Vicksburg. Admiral David Glasgow Farragut’s flotilla defeated a sizable naval contingent at New Orleans. Thankfully, much of the confederacy’s gunboats for riverine operations were destroyed in that battle (Gabel, 2013). This made the journey for Grant and his forces not necessarily easier, but it was one threat that had lessened in its severity. The highest threat was that of the shore batteries along the river.

[Author’s Note: For the sake of brevity, I will not discuss much on the journey to Vicksburg, the city the confederates called the Gibraltar of the West. For further reading on the subject I recommend this.]

On May 16, 1863, Hovey, now a Brigadier-General made the opening move for the Union against the Confederate lines. He retook the crest of Champion Hill, now also known as Hovey’s Hill. The confederates were slowly being pushed off of the hill, until Confederate reinforcements arrived and re-captured the hill’s crest.

Hovey lost one third of his men that day. But, he praised the actions of his 12th Division and brave regiments. His own words explain the situation well in his official after-action report.

“I cannot think of this bloody hill without sadness and pride. Sadness for the great loss of my true and gallant men; pride for the heroic bravery they displayed. No prouder division ever met as vastly superior foe and fought with more unflinching firmness and stubborn valor. It was, after the conflict, literally the hill of death ; men, horses, cannon, and the debris of an army lay scattered in wild confusion.” (Hovey, 1863).

Champion Hill was a bloody way station on the trail to Vicksburg. At the siege, he and his division would still see action.

At Vicksburg Hovey served under Major-General E.O.C Ord, and Hovey’s artillery and infantry supported the efforts of other units attempting to break through the confederate lines. Hovey’s after action report praises the bravery of his men.

“Officers and men displayed great firmness, coolness, and bravery during this ever-memorable siege, and I cannot discriminate among them.” (Hovey, 1863).

After the war, Hovey once again turned his sword into a ploughshare and resumed his civilian occupation of attorney. His country called upon him again in 1865, on August 12th to serve as “envoy extraordinary and minister plenipotentiary of the United States to the government of Peru” (Lang, 1952). This was not a pleasant position as Peru was a fragile nation fraught with revolution and unrest. To add insult to injury Hovey’s second wife died on the journey.

Hovey’s tenure in Peru lasted four years. He returned to his home state of Indiana to resume his career as an attorney. In 1872 though, his friends and neighbors urged him to run for the office of governor. He kept himself out of politics. It was not for two long as in 1887 he was sworn in as a congressman for Indiana’s 21st congressional district. He did not stay in congress for long.

In 1889 he became governor of Indiana. Governor Alvin Hovey served in office for two years. He died on November 23, 1891 in office. His was a life of service, sacrifice, ambition, sorrow, and triumph.

One thought on “All in The Family Part III: Alvin P. Hovey: A soldier-statesman by Brandon C. Hovey”