Things have been a whirlwind lately. I was contacted a few months ago by Bryce Smythe-Jones, a former major in the British Army. He and I are members of a military history forum together and we banter about Finland’s Winter War on occasion. Well he penned a novel and is self-publishing this year. He told me that he wanted me to review it for storytelling ability. I can tell you up front that this is a most excellent yarn. Major Smythe-Jones has rocked the casbah with his debut novel.

Title: A Mission to Mikkeli and A Trip to Berlin

SOE Captain Philips Stewart-Parkes born to a Swiss father and an Scots-Irish American mother has just returned to London from a mission assisting The French resistance in destroying some supply depots with Berber resistance groups he trained earlier in the year. After successfully completing the mission he finds himself with Major Andrew LeMotte of the United States Army in a London pub. He and the major enjoy their beers a little too much and switch to hard liquor. After the seventh Maker’s Mark and Coca-Cola Stewart-Parkes cannot remember that he has an appointment with Winston Churchill, and his boss the next day.

After being dragged to the meeting by the redcaps, he and his boss almost come to blows. Churchill assigns him a suicide mission, kidnap Finland’s Marshal Mannerheim. The Finns had been inflicting too many casualties and something had to be done to reign them in. Stewart-Parkes accepts the mission, but his booze addled brain doesn’t comprehend much of the conversation. Churchill pats him on the back though and assists him in battling his hangover. An excellent bit of dialougue is exchanged between Churchill and the protagonist.

“My, dear Major. You are as drunk as I was the night with Lady Astor. Have some Boodles Gin, my boy.”

“If Lady Astor was here, she’d call us both drunks. Brave drunks.”

Armed with a Mauser HsC and an intimate knowledge of cross-country skiing and saunas, Stewart-Parkes departs for Finland. After some exchanges of fire between drunk Soviets and himself he finally makes it to Mikkeli where Mannerheim is headquartered.

Stewart-Parkes’s mission to Finland has a rocky start, but he manages to be arrested by Mannerheim’s provosts as he enters his headquarters. He and Mannerheim discuss firearms, horses, and Adolf Hitler. Another excellent conversation is put in place by the author.

“Major, your presence here is redundant. Although, I am honored I am the target of a kidnapping, I am about to betray the Germans. Why don’t you go to Berlin and deal with Hitler. I know where he’ll be hiding. After all, he did come to my seventy-fifth birthday.”

Major Stewart-Parkes is briefed by Mannerheim and he then departs for the Third Reich’s sanctuary: Berlin.

Stewart-Parkes uncovers Hitler’s bunker and is then captured again. This time by Eva Braun, Hitler’s lover.

“Vat are you doing here, Englander?”

“I thought this was the gentlemen’s restroom.”

This is one criticism I have of Smythe-Jones’s work: Stewart-Parkes was captured by the Germans and the Fuhrer directive regarding commandos wasn’t honored. Braun didn’t shoot him. Instead she took him to Adolf.

An excellent conversation happens between Stewart-Parkes and Adolf Hitler.

“Mein Fuher, I’m afraid you are  mistaken the Allies on both sides are pinching you like a grandmother pinches her best grandchild on an Easter Sunday. Your doomed.”

“Well, we’ll see about that. I challenge you to Rocheambeau.”

Adolf Hitler would often challenge men to personal combat. And his methodology was oftentimes Rocheambeau. This was something Goebbels and Goering encouraged him to do despite Himmeler’s admonishing remarks. You see, Hitler had an advantage. He was a monorchid. Except Hitler had never gone up against another monorchid!

“Mein Lieben is right. I’m a monorchid too, Adolf. I had mine removed at the University of Edinburgh.”

Before Hitler could respond, the chamber of the Fuher bunker split in two by a cave-in. Stewart-Parkes escapes and flees Berlin with a blonde bombshell of a Polish Resistance fighter.

Parting Thoughts:  Buy this book for $19.45 on Amazon. This alternative history is unintentionally funny. 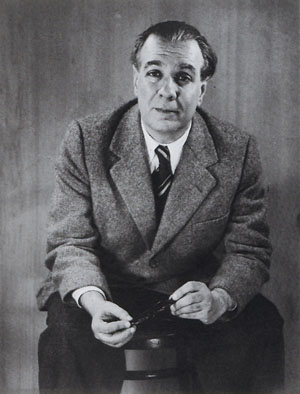 I pulled a Borges