Serving Methodology: Can poured into a shaker pint

Background: It is no secret. I support hard working, honest police officers. America’s lawmen have had an image crisis over the past few years. In any profession there are bad apples. In my own profession there are bad apples too. But don’t identify the mistakes and malicious actions of some to be the character of the whole. Also do not attempt to analyze and understand a situation that you cannot by dissecting police tactics to the point where officers cannot do their jobs in a crisis, because they are forced to be politically correct.

Blue Blood Brewery in Lincoln, Nebraska have a brilliant beer called Last Call. Officer line of duty deaths are significantly up this year. This beer is brewed for “those who showed their strength in service and ultimate sacrifice.” This imperial amber is a strong brew and worthy of its purpose.

Taste & Aroma: This is a beer anyone can enjoy. The aroma is one of crisp malt. The feeling of wet grain is there too. This is an ale for lager lovers. The flavor is malty at first, but then a spicy hop kicks in to give it a zingy finish. Reminiscent of Great Lake’s Eliot Ness. This is a simple, honest, straightforward imperial strength beer. Again, worthy of it’s purpose. 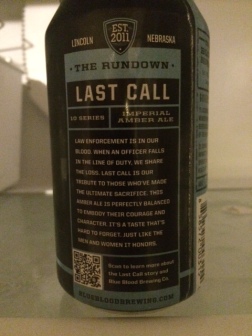 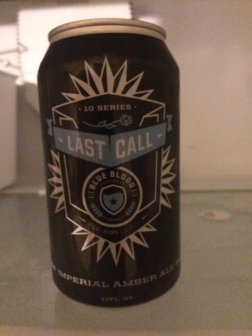 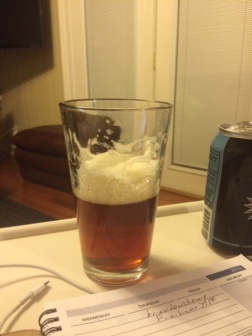 Final Analysis: Buy this beer. Back the badge. Now, I want to try this on draught. Till then I’m going to have to buy more of these 10 series beers by Blue Bloods.