Paul, the Emperor of Boronoissus found himself wistfully looking outside the windows of the car again. The train was now heading south. He had just gone over his proposal for the umpteenth time and he was finally satisfied. He was eager to get this journey over with and to right the wrongs his grandfather perpetrated. His grandfather was Alexander IV, who started this Second Varmish War that lasted for ten years. He died of an assassin’s blade four years ago, far from finishing this ghastly war. His father ascended the throne then, Daniel IV. His father only reigned two years as he died at the Battle of the Fourth Bend of the Tumras River.

Paul had ascended the throne when the war had been raging for eight and a half years. The Varmish Commonwealth was once the largest nation on the continent of Sactscoria. Now it was almost nothing. The Knobbian King, Louis II wanted to see the Varms crushed once and for all. Paul though, unlike him had served on the front lines as a battalion commander, then a brigade commander, and finally a corps commander before he ascended the imperial throne. He knew the price of war. Seeing his grandfather and then his father die in a war that was in all honesty unnecessary was too much.

Gramps just started this because he had all the justification in the past to cause a war. The Varms had been harassing our merchant fleets for years. It was an opportunity. But, he always saw opportunity. He never saw costs.

Over six hundred thousand soldiers were killed during the war. Not just by the Varms though. The Varmish government in an act of desperation during the war contracted fierce Triverentese mercenaries halfway through the conflict. These fighters more than supplemented the Varmish army. At one point they made up close to half of it. It was thought by members of the court that Triverentese mercenaries were responsible for the assassination of Alexander IV. No evidence was ever recovered though. The assassin escaped the palace grounds and left little traces aside from footprints.

Losing both my grandpa and my father were one thing. Losing entire regiments of soldiers, men with families was absolutely devastating.

More than just Boronoissusian soldiers died in the battle. Soldiers from the vassal states of Masgonvey and Jaxsimus died in the conflict. Colonial forces were also employed from the Southlands. And also a place called Ustenbaad. The ten Ustenbaader Legions were exceptional brigade sized forces that he personally commanded during the war. The Ustenbaaders were competent warriors and soldiers. Paul had just signed a bill granting their autonomy. They would still be a part of the Empire of Boronoissus, but they would have their own home rule government.

They paid a high price during the war. Higher than they needed to pay. It wasn’t their war. This is the best reparation I can allow and provide.

Some of his ministers did not like this idea of Ustenbaad becoming a vassal state like Masgonvey and Jaxsimus. He was the emperor though. He had the power. Ustenbaad was wealthy in minerals. Ustenbaad also had a reasonably sized labor force despite the small size of that realm. Ustenbaad’s Legions would still be a part of the Imperial Armed Forces though. He would still be their liege lord. And the mineral wealth they had was now dwarfed by the vast chunk of Varmland south of the Boro River and north of the Kingdom of Knobb that was now going to be divided into several imperial provinces under the peace terms. The Varms would have no more say in the fate of these conquered lands.

They’re out of money and out of war materials. Peace is the only logical step forward for them. Let’s end this war.

A rap at the door was heard.

Paul turned to the open door, it was Captain Gavolokis, one of his life guards.

“Majesty, the Engineer wanted me to inform you that we are now heading south towards Starya Priska. We’ll be passing the town in fifteen minutes, and we’re roughly an hour from the meeting site.”

“Thank you, Captain. You are dismissed.”

The captain shut the door and left the emperor in peace and quiet.

I’m eager for this peace treaty to be signed. The armistice will hold still, but we need a real and true non-aggression pact. This is what this will uphold.

His advisors all appreciated his desire for peace. This reckless war could have caused the end of the Empire of Boronoissus. The vassals agreed. The one vassal that was always the trouble maker objected: Knobb. The Knobbians wanted to crush the Varms, as they had a historical rivalry. Their own forces were oftentimes pitted in battles where there were no objectives to seize, just enemies to kill.

Their aggression must be slaked. We don’t want this peace being undone by their actions.

Paul had a plan to force them to downscale their army. Knobb was the largest vassal. He therefore planned to raise their taxes and impose a series of small tariffs on them. Their defense budget would have to be cut, if their king was a rational thinker.

I don’t need Knobbians causing problems in the east when the growing threat of Triverent is looming in the west. The last thing Boronoissus needs is a war to destroy us from both sides. The Priskans will aid the Varms despite them taking over half their land in the first Varmish War when they were our allies. All of this fighting must stop. This way Boronoissus is protected as well as its vassals, and domestic matters can become a priority again. There is a growing wage gap, a shrinking middle class to go with it in urban centers and far too much crime in Xenophon. It is almost a lawless city.

Paul felt his blood boiling and sweat dripping off of this moustache as he thought about the responsibilities of a job that he did not think he would inherit at age thirty-one. They all expected his grandfather to live another ten or fifteen years. And who would have thought that his father would continue to lead the armies of Boronoissus in battle while also serving as emperor. That was a reckless choice. Paul produced his pipe and began walking to the caboose of the train. He would take a smoke on the balcony. Then he would join his family in the dining car for a late lunch. He proceeded through a guard car. Twelve of his life guards rose as he entered to salute. He returned it. Then he crossed over to the caboose of the train which had a few chairs and sofas. At that point he stopped to light the pipe after filling it with some flake cut tobacco. He lit the pipe, stepped forward towards the balcony door which he now opened and then a whirlwind of heat and fire proceeded by a large boom tossed him out of the train and sent the caboose flying off of the rails along with him. His pipe never made it to his lips. He had no last words as the blast’s ferocity killed him in an instant along with the hundreds of fragments the blast created.

The once mighty locomotive had turned into metallic dust from a series of three blasts. The train’s passengers became a vapor, and what was once the Imperial family and a majority of the Imperial Court were no more.  The train’s cars were now twisted metal. The emperor himself was ejected from power poetically by the blast of the bomb. His body was never found.

Order died that day in three blasts. The emperor had no heirs. The Knobbians came to power. This was the beginning of the dark time known as the Knobbian Usurpation. The Ustenbaaders were not given their freedom, and the Knobbians seized the newly conquered territories from the Second Varmish War. The kings of Knobb were known for their autocracy. They ended the benevolent dictatorship that was the empire of Boronoissus and replaced it with their own kind of rule. Order was replaced with totalitarianism. 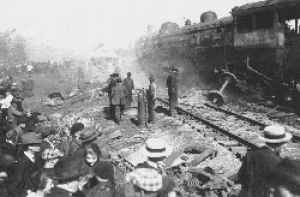