[No Images are mine]

Earlier today, I wrote on one of the greatest games ever made: Deus Ex. I am continuing my three part series regarding this excellent game. Part I was about the wonders and the novelties. This segment is the shortest as it involves the game’s shortcomings. There are a few, but they do not cause the gameplay to suffer or the story to be stunted. All in all, this was a flawless game, save for a few silly things. 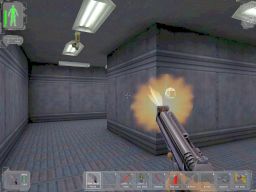 The 10mm handgun: The player’s starting handgun only has a six-round magazine. It is a full-sized handgun that has a mass of 10 lbs according to the player’s inventory. This weapon behaves more like a .40 S&W, but it is reminiscence of a revolver with its small capacity. Thankfully, this handgun can be upgraded to a higher, more realistic capacity. I upgraded it to ten rounds in my last playthrough. Also I added a scope a laser.

A contemporary handgun in 10mm is the Glock 20. It has a higher capacity, lighter weight and behaves like a 10mm handgun. People that this gun bear hunting. The handgun in Deus Ex, however can hardly bring down anything in the game without serious upgrading. A more realistic caliber for it would have been .380 ACP with its strength.

The stealth pistol in the game is a worse offender. It too is 10mm, but with the stopping power it has it would be more apt to call it a .22 LR.

Vandenberg Missile Silo Level:  This is the worst level in Deus Ex. The level hardly has a purpose other than filler. Bob Page commandeers this missile silo and points it at Gary Savage’s faction’s base. One of Page’s cronies, a Howard Strong spearheads this operation. Frankly, this level is nothing but filler and unnecessary. Howard Strong is a lousy boss who is easily defeated by the flamethrower or GEP gun. This level does not add to the story, and the enjoyment of the game. It would have been better to include the space station level they did not use rather than this mess.

There are few shortcomings to Deus Ex. These are two I have found.