June 6th, 1944 was the beginning of the end of the Third Reich. Allied forces invaded by sea and by air and began the big push into Hitler’s Fortress Europe. 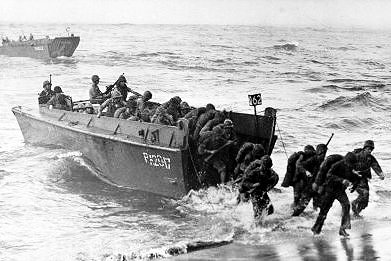 This was a heroic act by those who served then in the Allied forces. It kept us free. It kept the world safe from the evil of it’s time: Nazi Germany led by Adolf Hitler. The free world announced to the Third Reich that it’s reign of terror was going to end as Utah, Omaha, Gold, Sword, and Juno beaches were stormed.

Hitler knew that hell itself was being unleashed as U.S. Army Rangers took Point Du Hoc and rendered the artillery battery useless.

The enemies of freedom knew their days were numbered when The Oxs and Bucks of the 6th Airborne Division took the bridge that would later be known as Pegasus.

D-Day was the harbinger of death to freedom’s enemies.

“You may have to fight when there is no hope of victory, because it is better to perish than to live as slaves.”

“Live Free or Die” is the state motto of New Hampshire. That’s what the allied powers were fighting for, to live free or die trying (Except the Soviet Union, but they weren’t present at D-Day.) When I was a little boy, I can remember my grandpa asking me what kind of country the US was. I told him we were a liberty. He laughed and said it was a close answer. Our nation is number one in liberties. We have our Bill of Rights, I’ll cut to the chase and tell you that my favorite amendments are: 1st, 2nd, 4th, 9th, and the 21st. Yes, ladies and gentlemen guns and beer are in that list.

Serving Methodology: Can poured into a pint glass.

Taste & Aroma: When I smell this beer, my mind is transporting me to a northwoods taiga with the pine and resin nose it has. I’m back in Labrador City, NL after a whiff. This is a sharp beer with an opening bite, clean malt body, and a light hoppy finish. This is an IPA for non hopheads as well, I suppose. Well, it adds to the feeling of liberty this beer gives you, doesn’t it? It is a democracy with majority rule and minority concessions. It has a hop bite, but it is balanced to where Dave and Darla Domestic-Drinker can enjoy it along with Henry Hophead.

Final Analysis: This is an excellent beer from a renowned brewery. I’ll have to explore more of their wares. I’m eager to try this on draught too.

One thought on “Brew Free Or Die, An IPA in honor of D-Day”