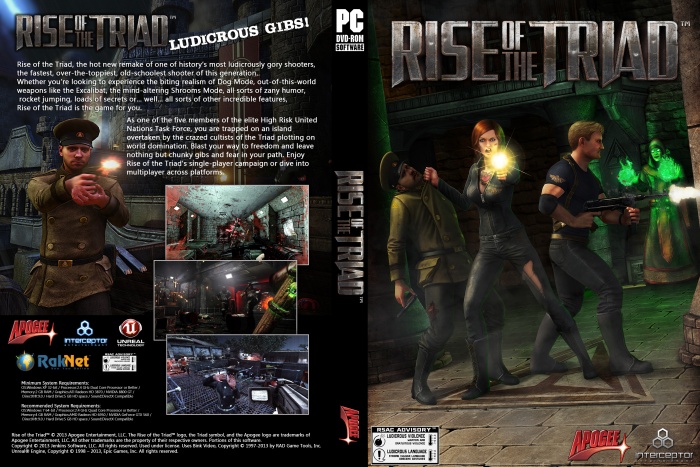 Price: $3.79 on GOG.com (I would never pay more than ten dollars for the original, and never more than five for the remake)

[NO IMAGES ARE FROM ME. ALL ARE COURTESY OF BRAVE REVIEWERS BEFORE ME]

Some things and people in life lose their way. Films, books, and games are no different. Some things need to be tried. If things don’t work the first time change. Unfortunately, Rise of The Triad in both of it’s incarnations is quite awful. I played the first Rise of The Triad (1994), simply because it had a Perfect Dark like tale of being a proposed sequel to a game and then becoming something completely unique. Rise Of The Triad was supposed to be a sequel to Wolfenstein 3D.

Perfect Dark was supposed to be Rareware’s second James Bond game for the Nintendo 64.In both cases the original idea was no more. Perfect Dark became a cult classic. As for Rise of The Triad, to call it a cult classic or a success would be close to a lie.

The enemy placement makes sense. Fireteams of jackbooted quasi-Nazis attack the various player characters. They’ll start shooting way before you’re a practical target for a handgun. Oddly enough they’ll still shoot at point blank range with their bazookas and rocket launchers. The player’s conventional firearms: a Walther PPK with infinite ammo and a horrid bastardized MP40 with a side-loading magazine cannot decide if it is a Sten-Sterling or an MP40. Both deal moderate to little damage to enemies. Most of the other weapons in the game are ‘launchers’ bazookas, rocket launchers, and grenade launchers. All which seem to be purposefully overpowered.

At first this game seemed like a remake, but it unfortunately is more so a parody. A writer on IGN said multiplayer is this game’s only saving grace. Frankly, I’m never one to care for multiplayer. So after being sent back to a far checkpoint over and over by hordes of foot soldiers charging me and my only real line of defense being a rocket launcher (a tactical retreat was not an option), I decided to quit this. This is just as bad as this game.

Furthermore, why include those dumb platforming sequences in a FPS. This is my first problem with this heinous game.

Forget this and play something else. If you long for remake of a retro shooter play The New Order. I remember Duke Nukem Forever being better than this.