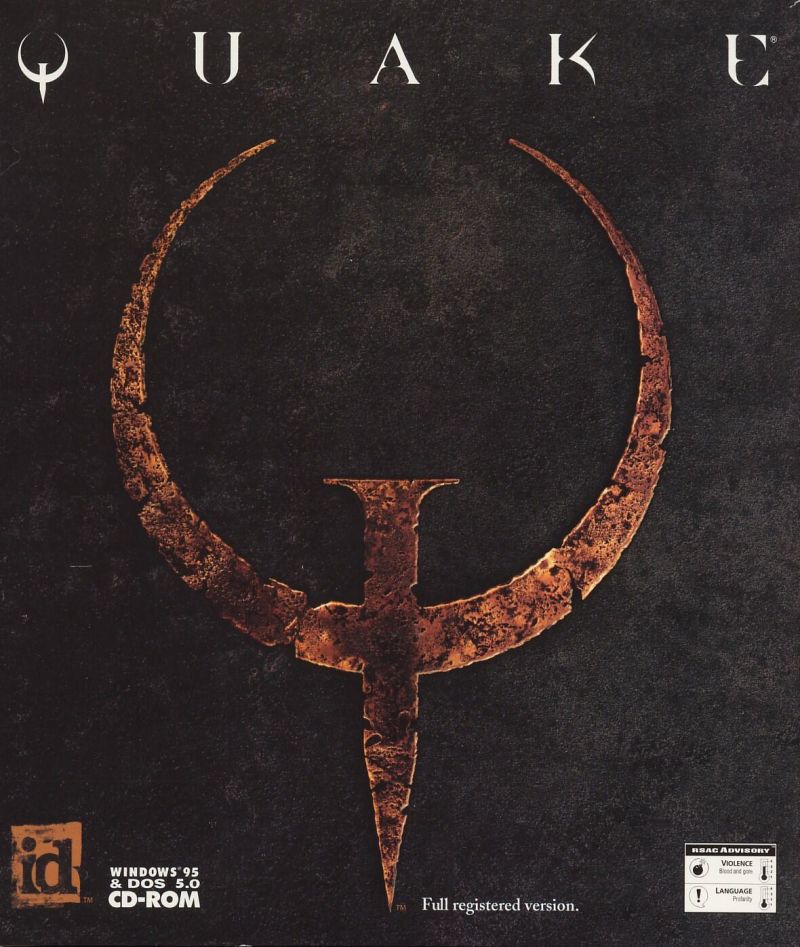 [No Images Are My Own]

Background: Quake is one game I had never played until now. It came out when I was six and now at 26 I am writing about it. Quake is a lot like Quake II, it is a bridge between the first generation of First Person Shooters to the second generation. The genre really began with Wolfenstein 3D (1992). Quake II and Star Wars Dark Forces II: Jedi Knight both in 1997 perfected the genre in it’s second generation. Quake’s best qualities are it’s atmosphere (level design/music/weapons).

Atmosphere: Each episode has a dark medieval like aesthetic. Save for the first levels of the last three episodes. Those have a ‘techbase’ Doom-like feel. Aside from these the player will experience wide castle courtyards, underwater labyrinths, castle towers, dark caverns, and evil cathedrals. Furthermore, the bosses at the end of each level add to the dark aesthetic this game has. Watch this.  Enemies range from ‘zombies’ to ogres. Worse enemies are present too. Unlike Quake II where whole platoons of foes are engaged, the player oftentimes faces squad sized resistance.

The weapons range from a super nailgun (four barreled gatling gun), a rocket launcher, a grenade launcher, a nail gun, shotguns, and an axe. The nailguns are some of the best weapons in the game. The rocket and grenade launchers oddly run the same ammunition. Both the double barreled and the single barreled shotguns are definitely an example of the thinking behind first person shooters of this generation. Although the player characters in both Doom and Quake are military they oddly enough do not use military weapons.This does not detract from the atmosphere. And it’s last facet worth discussing is the games’s soundtrack.

Nine Inch Nails (Trent Reznor) who will have any reasonable person afraid of Americans created a synth-driven soundtrack that will have anyone scared of Quake‘s horrifying and challenging levels and enemies. I understand now why I never really wanted to play this game. I’m glad I waited. This would have given a little boy nightmares.

Final Analysis: This is a mediocre game nowadays. The sequel is far more interesting and story-driven. This game has a forgettable and barely noticeable story that hardly sets a stage or breaks any ground unlike the game’s overall impact on the FPS genre. You are better off reading Dog The Bounty Hunter’s autobiography.  As I stated earlier, this game bridges the gap between the first generation of the genre to it’s sequel the next generation of it’s genre. All in all, this is worth playing. But do not expect the world. The second game is altogether better. I’m like Duke Nukem regarding this. I’m not really afraid of this Quake.