Crown Valley is a serendipitous trifecta of distillation, wine making, and brewing.They’re headquartered in Ste. Genevieve, Missouri. While on vacation with my wife in Branson, MO at Crown Valley’s facility there, we enjoyed the wine, whiskey, and the beer in a samples. Amanda and I were impressed by the products. Furthermore, we were also impressed by the service there. Makayla and Sandy were gracious hosts and superb servers. We adored our meals at the Bistro, and after we sampled we knew well what we were going to include in our a la carte six packs. Gunslinger IPA was my first choice. Amanda savored the ciders. Gunslinger IPA is one superb beer. 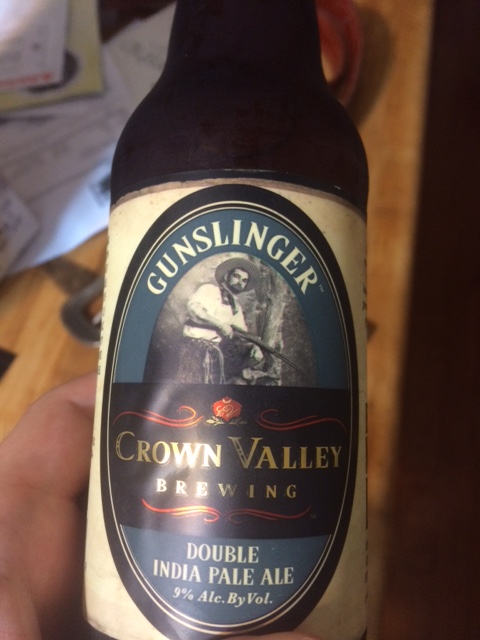 Taste & Aroma: A nice fluffy and floral hop hits your nose as you raise the glass towards your mouth. This is a nice teaser of what’s about to happen when you imbibe this magnificent ale. The flavor is sharp and hoppy at the start. This is countered by a nice grainy malt. The hops linger and so does the malt. As I said earlier, this is a perfectly balanced beer. As the beer warms the flavor comes out stronger as well. Don’t drink this beer ice cold. Serve this chilled.

Final Analysis: I have had this beer on draught at the Branson, MO facility and I’ve enjoyed it from the bottle. This beer is a superb example of how a double IPA, can rise above being a hop bomb and instead be a balanced masterpiece of a beer. Crown Valley Brewing made a masterpiece here.

One thought on “Gunslinger: An Robust IPA from Crown Valley Brewing”