This new feature on this blog has become quite popular. Enjoy these prior installments here and here.

For years I have hated this song. This is a song oftentimes sung by people who have no business singing. Many a time I’ve heard this song’s chorus butchered. Kenny Rogers and Johnny Cash sing this song the best. And after hearing this song and listening to the actual lyrics. I love it.

“On a Train bound for nowhere…”

Daguerreotype was a precursor to the modern photograph. This daguerreotype of Sherman is lifelike. It shows a haggard man who bears the scars of his service and has looked at his reflection in the scythe of the grim reaper. After all, this is the man who said “War is Hell.” Kenny Rogers’ character in the ‘Gambler’ music video made in 1978 has that look in the opening of the video near it’s beginning. It appears that a daguerreotype is beginning to speak.

He has a stately look with a pensive aura. A gunbelt is over his coat’s shoulder bearing a Colt Peacemaker. He opens the song on a train bound for nowhere, and his companion: The Gambler realizes that he is “out of aces” and for a dram some advice is given. And the oftentimes over sung begins shortly afterwards.

The gambler is giving the narrator the tools to succeed in life, existence, business, politics, and war. He’s a Sun Tzu, A Zig Ziglar, a Dale Carnegie, or a James Carville.

This song invokes memories of the many mentors I have had the fortune of having in the twenty-six, soon to be twenty-seven years of my existence. The Gambler is informing his protege that you must learn to use the assets and skills you have to overcome your handicaps in any situation. This is a valuable lesson for anyone regardless of their station in life. The end of the video is my favorite part of the video as this sage gambler’s apprentice who is now the master is pouring the bourbon into his glass and offering the same advice to the new apprentice: the listener. This reminds me not only of my own life but also of Daniel Hovey’s life. His mentor was the rector of Waltham Abbey, the church his ancestor: Tovi The Proud built. Hovey’s mentor offered him advice and gifts as he made a new life in the Massachusetts Bay Colony.

A movie series spawned as well from this hit. https://www.youtube.com/watch?v=MpGgCrcfWBg

Kenny Rogers makes a good joke on how cliche the chorus has become over the years. 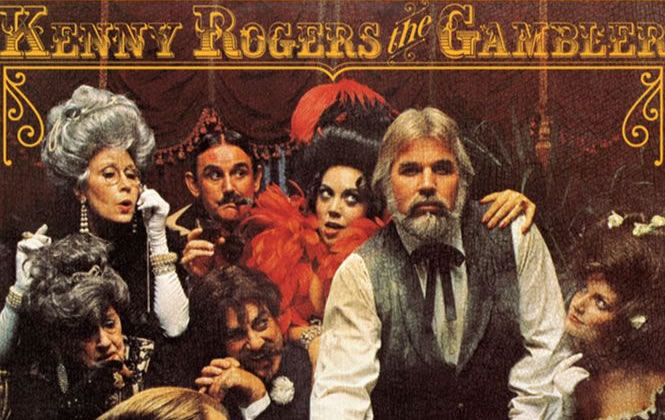 2 thoughts on “The Gambler, What I’ve Listened To Lately, Or how I stopped worrying about people making the song overshadowed by its chorus.”