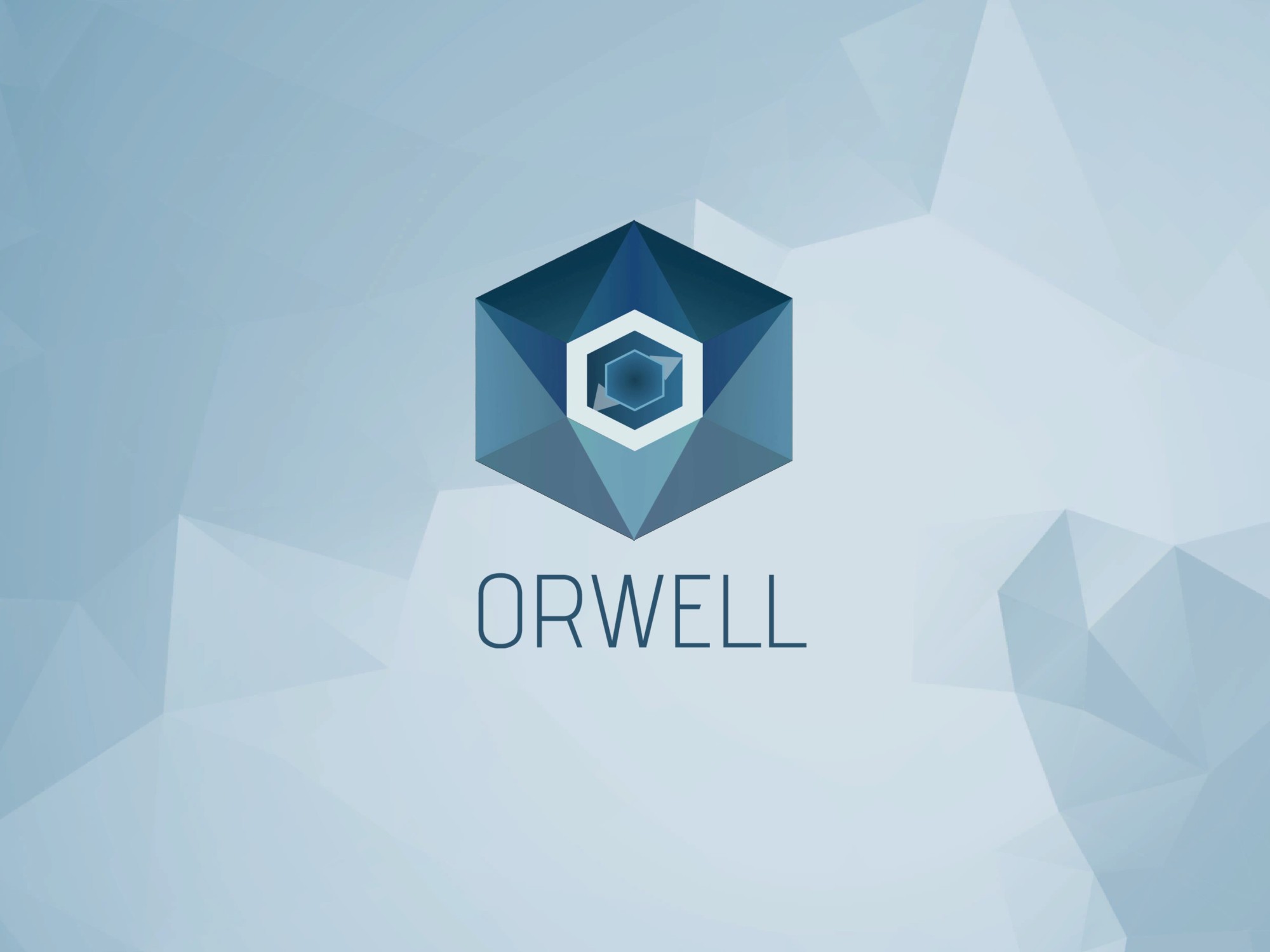 Background, Synopsis & Gameplay: 1984 by George Orwell had a powerful impact on people living in free countries. This was a magnum opus for speculative fiction “War with Eurasia” and “Big Brother Is Watching You,” are two phrases oftentimes heard in contemporary culture and they’re everywhere online. George Orwell was a lover of liberty and someone who wanted to write a warning as the world globalized and morphed into something unrecognizable from his youth. Orwell plays on both of those aforementioned phrases. 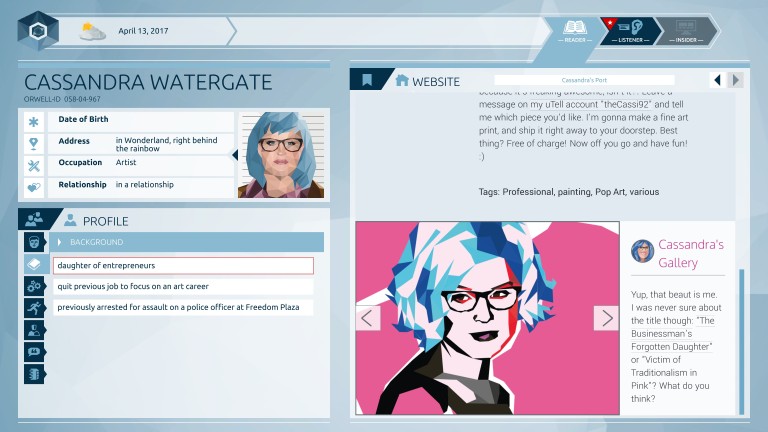 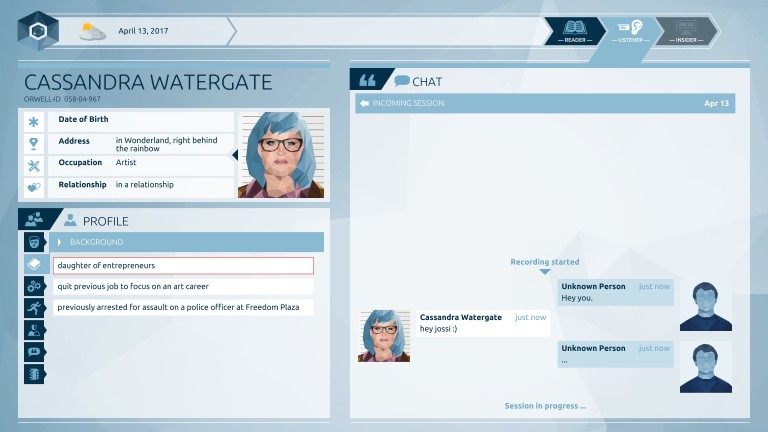 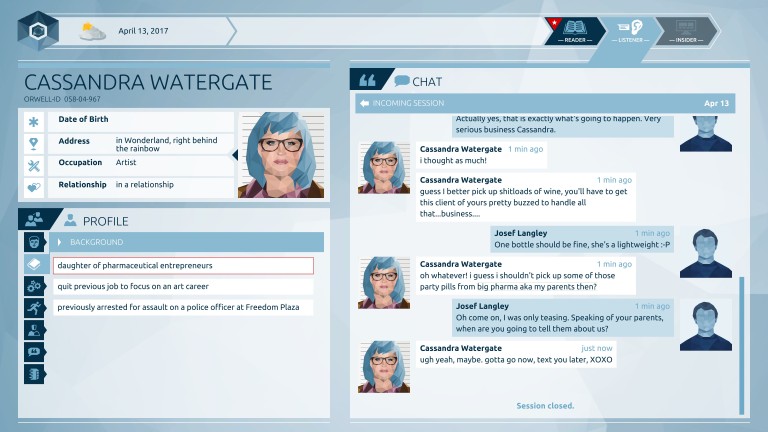 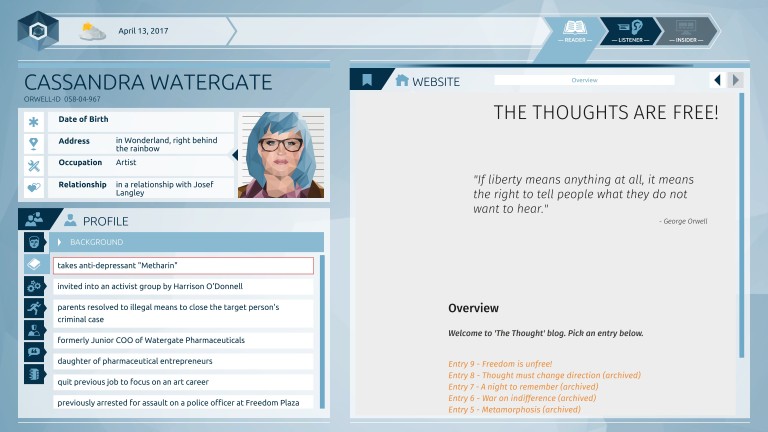 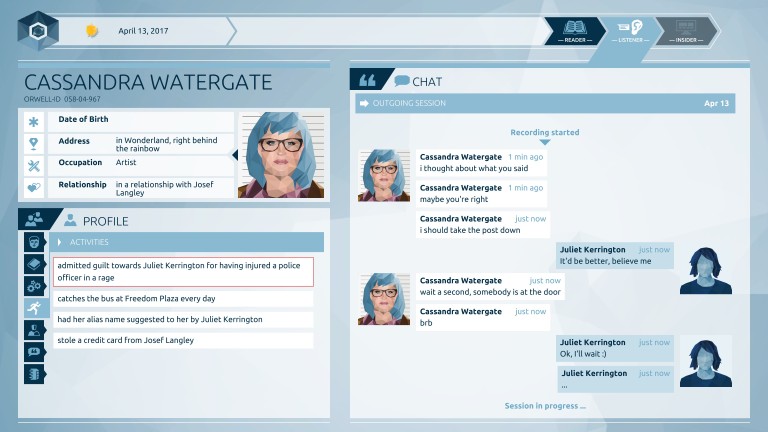 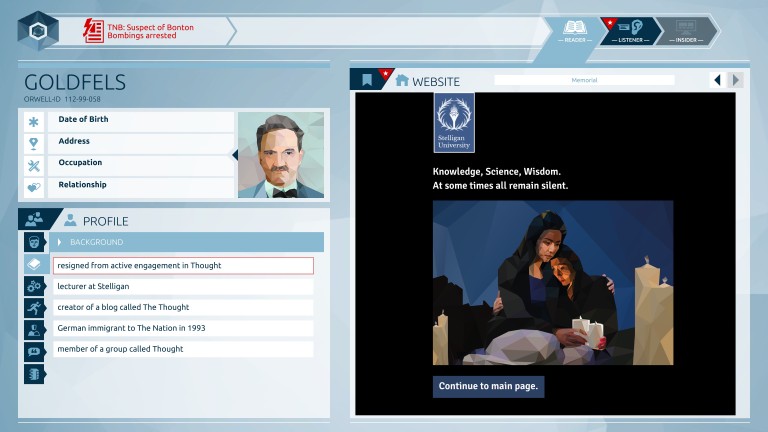 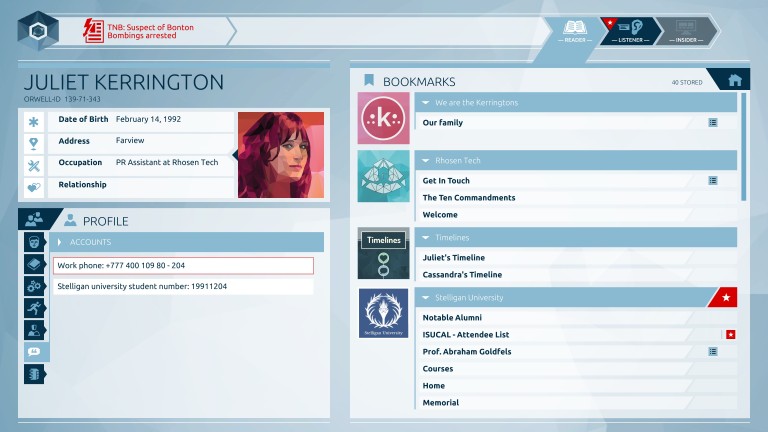 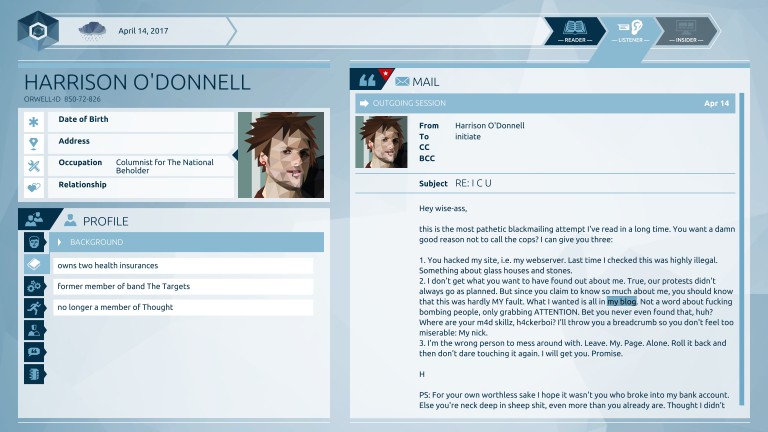 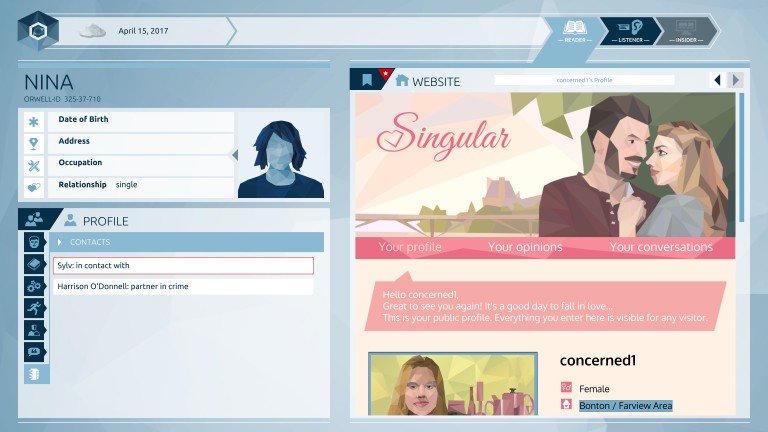 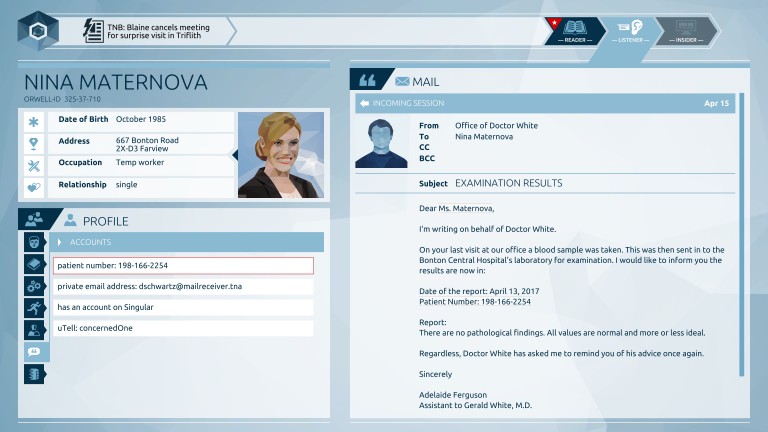 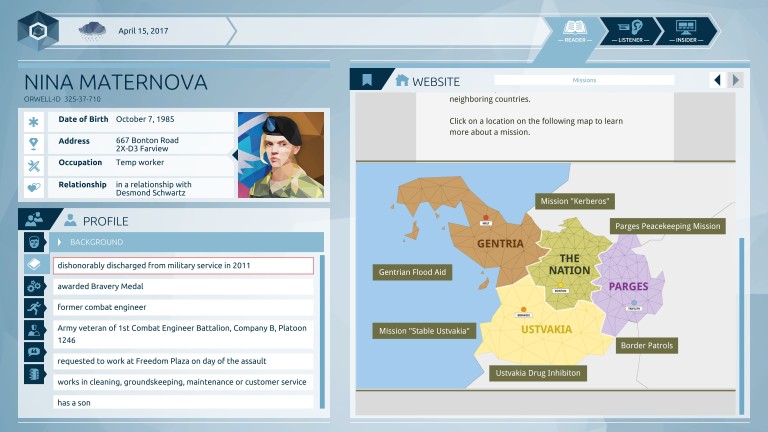 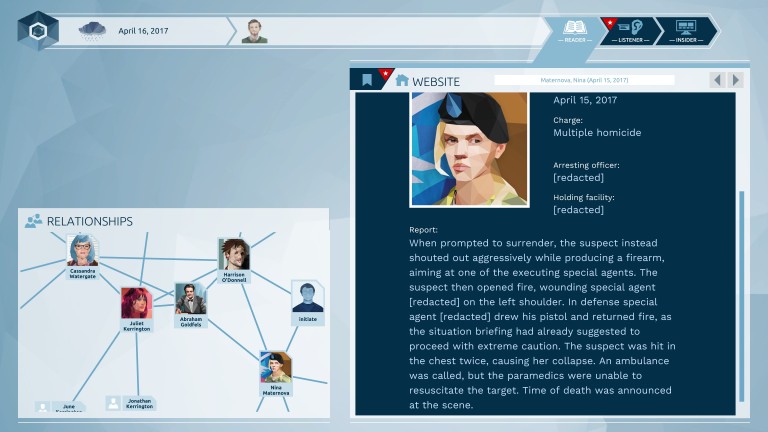 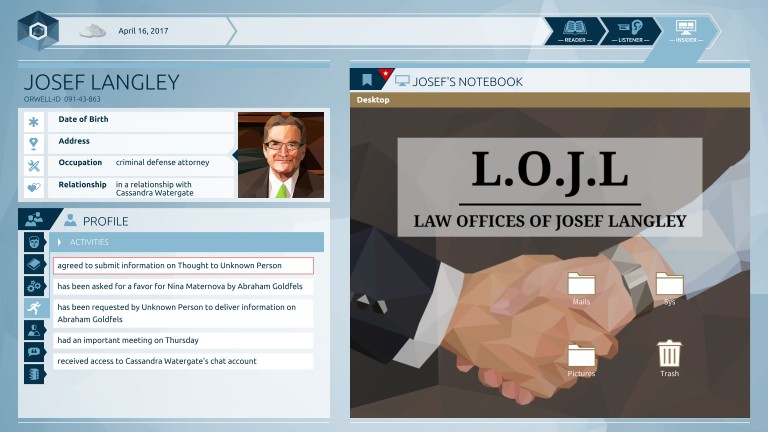 In the game the Orwell browser/surveillance tool is the newest surveillance apparatus for big brother, or in this case The Nation, which is controlled by one powerful political party known as The Party. The Party has no documented opposition mentioned in the game. The Nation is no doubt a country going through transitions. The player character’s function that of an Orwell investigator (social media investigator, data miner) is created by the passage of The Safety Bill. This allows for warrantless wiretapping and warantless arrests. During the course of this game you report your findings to an Orwell Advisor who can only talk to you, you cannot talk to him. The only communication you can have with him or her is the ‘datachunks’ you provide. With this he has the actionable intelligence to send a ‘intervention team’ likely tactical officers to arrest or in some cases neutralize the target person (person of interest, there is no due process in The Nation, from what I can see.)

As the game progresses, you analyze links between students and a college professor to determine their involvement with a series of politically-charged protests and terrorist attacks. You’ll find photographs, build a case against them with their own words, and predict their next moves by remotely accessing their devices: smartphones, tablets, and computers. You will drop in on their ‘Timeline’ accounts, dating profiles, employment job sites, and see their most intimate communications to collect intelligence for your advisor to make an actionable decision regarding their guilt or innocence.

The story is rich, the characters are interesting: your advisor is a rather stodgy but competent fellow. One of the persons of interest is a punk rocker, another is a PTSD victim. And one person of interest’s identity still baffles me, and hopefully there is some potential for a sequel with that. This is a game that flows well, and you’ll find as well as I know that the devil is in the details.

This game is so interesting and so captivating, I was shocked my wife stayed close to my shoulder as I played it. She doesn’t have much of an interest in games but she enjoyed this quasi-simulation that was close to authentic cyber-stalking (social media investigations) as it gets. It reminded me my days as a private investigator. While I never investigated national security matters, this definitely brought me back to another life. 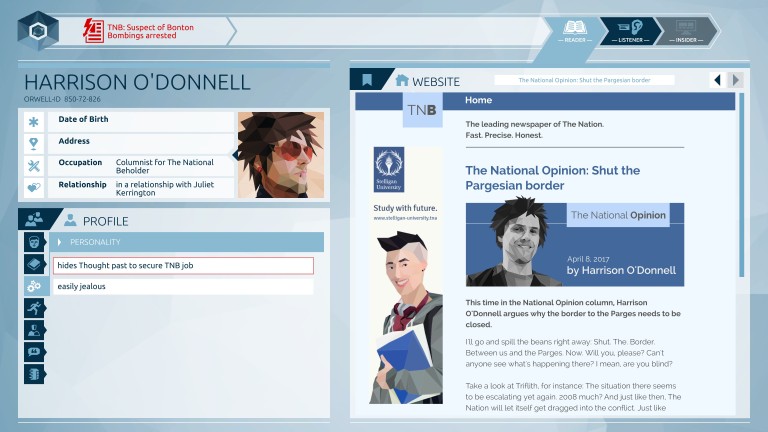 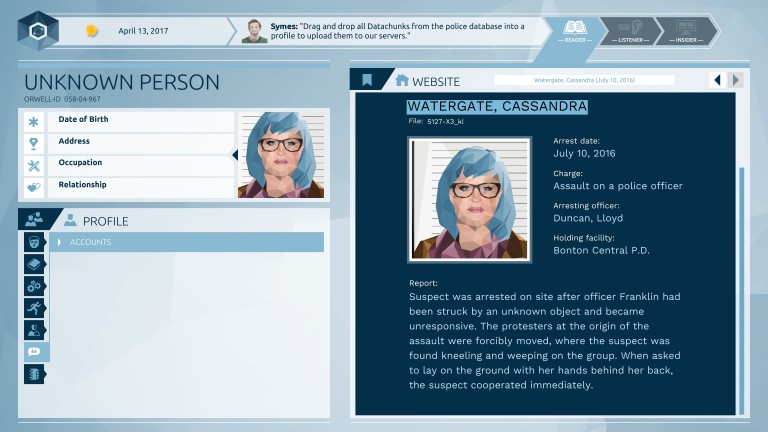 Realism: As a former private investigator with a focus in surveillance, I have conducted numerous social media investigations as well as numerous physical surveillance operations. They are oftentimes done in tandem. This is as close to the real thing as you can get. The devil is in the details, and Orwell punishes the player if you don’t find the details. When I was conducting surveillance operations I had my laptop and my smartphone ready to peer into the lives of my claimant’s activities as I multi tasked with having my eyes glued to their home and their exit routes. Proper planning included a deep sifting through of their social media information and their related profiles.

At times I discovered the claimant’s moving to a different address out of state. Another time social media was more than decisive. This woman had reported the same address as 1994, and was still getting her benefits check from her insurance company. A photograph of the interior of their boyfriend’s car proved to be the gap in their armor. This allowed me to recognize how high up the car was from the ground, and this in turn led to me uncovering her true whereabouts. Don’t just fear your state, fear corporations who have an army of spies. I know, I was one of them. Who knows, perhaps my replacement is building a file right now on you using open source intelligence collected from your social media.

Final Analysis: This is a game that allows the player to experience a social media investigation where the stakes are high and sometimes the consequences hit close to home. This is also a game that is socially significant in the fact that we are living in a Post 911 world where the ramifications of surveillance are still present thanks to real life versions of the Safety Bill. I would have to say that if you are interested in espionage, investigations, intelligence gathering, or just need an incredible immersive gaming experience that oftentimes only indie games can provide, this is a must play.

3 thoughts on “Orwell: Keeping an eye on Everyone”