Concealed carry pistols almost two decades ago were funny things. You had a revolver for full power applications, and if like me you prefer the comfort of a semi-automatic you learned right away then that your options were limited and for deep concealment you’d be going to a horrendous mouse gun like Beretta’s Jetfire. If you were lucky you could get a Walther PPK and enjoy elegance and a slightly larger caliber, .32 ACP over the Beretta’s .25 ACP.

Thankfully, things have changed considerably! Technology has allowed gun makers to craft weapons with power and concealment when it comes to semi-automatic firearms. One such gun maker that capitalized on new technology was Springfield Armory. Their XDS series of pistols was released in 2013. This alongside of many of its contemporaries tells a story typical to Springfield Armory, and that is a story of innovation.

I had not fired one until 2017, and the XDS9’s 4 inch variant is one incredible pistol. In the course of forty minutes I put two hundred and fifty rounds through this gun, not once did I have a failure to eject, failure to feed, or a misfire. This brand new gun enjoyed its first workout on the range. Let’s talk about my trigger time. 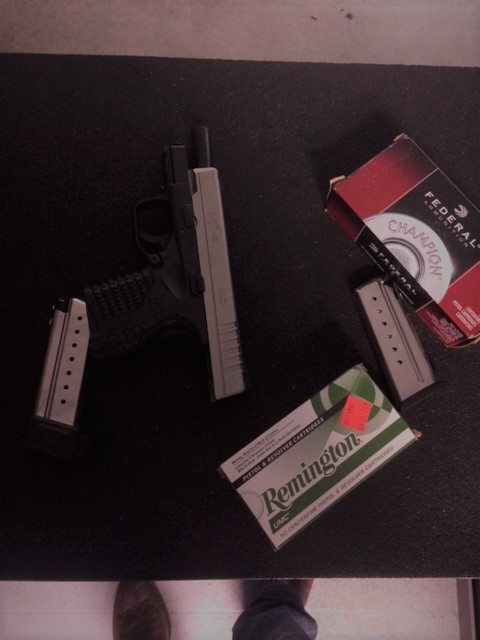 I used a hundred round box of Winchester White Box 115 grain ammo, two bricks of Federal Premium 115 grain ammo (total one hundred) and one brick of Remington UMC ammo 115 grain. All of these bullets were Full Metal Jacket. I did try some defensive loads in the pistol as well. These defensive loads were Hornaday American Gunner 115 grain jacket hollow points and Hornaday Critical Defense 115 grain FTX bullets with the polymer tip enplaced within the traditional hollow point cavity.

This firearm performed well with any kind of ammo.

I love the sight picture on this pistol. I love the tactile and aggressive grip the gun has, I love the options for the flush magazine and the extended ‘range’ magazine the weapon has. This provides the ‘hybrid’ function I was mentioning earlier, the concealed carry pistol but also the features of a full sized handgun as well. It is brilliant to know that you can have an eight round capacity in the weapon. The gun’s size allows for mild recoil, and there is little to no muzzle flip considering it is a 9mm handgun.

Aesthetically, the gun looks like something out of cyberpunk science fiction or Star Wars. I could see JC Denton packing this or Adam Jensen from the DeusEx series of games. It is small, accurate, and the lines of this gun would dovetail right into their worlds of intrigue and covert operations.

The four inch barrel provides a longer sight radius that improves accuracy and facilitates shooting at distance in a more feasible fashion. I struck the head of my second and third target at fifteen yards. And that is something that you can’t really do with the ‘carry’ class of semi-automatic handgun.

The only downside to this gun is the trigger break. The reset is fast, but the break is a little slow at first. Other gun writers have made the statement that their trigger pull gauge reads a flat seven pounds regarding the gun’s trigger, and I agree. It is slightly heavier than the Smith & Wesson M&P9 Shield’s trigger,but the reset is faster. I actually short stroked the trigger a few points during my first round of trigger time. However, I also threw a few shots with the long break. I improved my shooting with the second and third targets.

If you are looking for a carry pistol with an excellent sight picture and the capability for both carry and range work at distance, I would recommend the XDS9 without any reservation.