Background: I played this game close to when it was first released back in high school. I didn’t bother finishing it then as it was a rental. However, when I saw its low price on Steam, I figured that it would be worthwhile checking out. I’m glad I did. This is a entertaining comedy game that could have come from the writers of Monty Python. 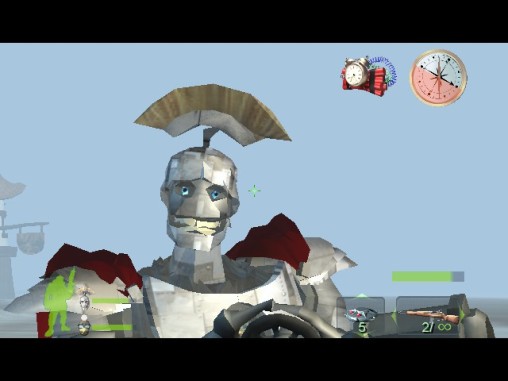 One of your trusty sidekicks: Q! 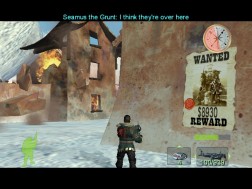 A wanted poster for the Lionhearts.

A humorous moment in the game.

The Good: You’re going to hear some jokes. You are going to laugh at those. You’ll be pleasantly entertained and challenged by the levels that are open battlefields for the most part. You’ll find the foe to be rather stupid when it comes to their tactics though. The enemy’s army is rather steampunk. They have airships and mechas. However they pack their infantry so close together you’d think they were fighting a war in the Napoleonic era. This is to your advantage in the ball turret defense levels. Those are memorable levels alongside the Zitwalla defense level. The village of Zitwalla is under an airborne assault and it is up to the player to defeat the rocket launcher armed paratroopers.

The Bad:  The game gets repetitive at points. Rescuing peasants, onion miners, and destroying bullseye houses can be tiresome after doing this more than once in the game. In some levels there is a lack of of health packs.

Final Analysis: This is a game worthwhile checking out with its low price and its atmosphere. It is not the best game you’ll ever play, but it is far from the worst. It is a shame they didn’t do a sequel.