Author’s Note: This is an excerpt from my first novel: Thuringer: The Officer (2013). You can read a synopsis here: Summary 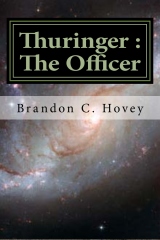 “Fine!  Our afterburner capacity is at 98%, sir,” Martin replied.

The Lieutenant had an amused look on his face, and made the come hither sign to Thuringer.

Martin got up from his terminal and followed the Lieutenant to an alcove in the corner.

“Mr. Thuringer, what do you know of cooling unit fourteen in the reactor section?”

“The commander picked you for a special project.   You need to reduce the accident rate and motivate that work center to perform at optimum levels.  We suspect they may be subject to corrective action if they don’t want to play along with their new supervisor.”

Martin could not help but frown. He knew nothing about the men in this unit, but he knew that the cooling team was one of the largest discipline problems on board the vessel.

“I know you aren’t thrilled, but the boss thinks this will be a good challenge for you.  You are an academy graduate after all.”

“This is a stationary Enforcer 11 drone.  Attach it to any hard surface in the room and it will monitor the fellas down there.”

Martin was even more puzzled.

“Am I babysitting these men?”

Abbasiov grimaced, and winced at the thought of having to tell Thuringer the whole story behind this project, but at this point he had to.

“Ensign Thuringer, they are suspected users of Narcoline-15.  We believe there is a dealer on board this ship, and we are going to use these poor performers as our ticket to bag the dealer.”

Thuringer accepted the drone, and begrudgingly accepted his new assignment.  He hopped on board the tram, and entered the location of the reactor/cooling area.  When he arrived a fellow in a Naval Infantry uniform saluted him.

Martin saluted back, hardly amused and not at all thankful about the help on this assignment.  He didn’t want to be a cop, and he didn’t need one telling him how to find this druggie.

“At ease. How will you be assisting me, Sarge?”

Franks pointed to his wrist tablet.

“I’ll be monitoring everything, sir.  Don’t let me interfere with you.  If I hear anything about the drugs, I’ll make a note of it.  I’m not here to arrest anyone yet.  I need to see a transaction.”

The Enforcement Platoon was a police force of 90 marines who acted as the ship’s police force while not in combat.  These soldier-investigators were always looking for trouble, even when trouble was not present.   Thuringer thanked him and entered the cooling unit workcenter.

The nine crew members who were there stood at attention and their supervisor exclaimed “officer on deck.”

“At ease, spacers.  I’m here to see that everything is okay.  Carry on, Petty Officer.”

Thuringer planted the Enforcer drone on the bulkhead facing the door he came in.  The grey robot was a foot long and became the color of the bulkhead when it was slammed into the wall.  Its sensory suite would pick up video and audio and feed it back to the Staff-Sergeant .  Everything in the chamber would be seen and heard.

Thuringer found an empty terminal and ran a couple diagnostic executable files.  He decided to make himself useful, even if he was doing someone else’s job.  He looked up. Everything seemed to be going all right among the crew in cooling unit fourteen.

Thuringer kept looking for ways to keep busy, but he was running out of options.  He called the Petty Officer over.

“Petty Officer Simmons, the diagnostic shows a buildup of particles in the Jeffery tubes above this cooling unit.  I want your men to go up there and scrub the area down.  There isn’t any time to call some grease monkeys to do this job.”

Simmons saluted and gathered half of his men.  Thuringer locked the cooling unit settings and commenced a physical search of the area.  He found an unlocked open storage bin by the Petty Officer’s station.  It contained a small baggie with a brown substance.  He held it up to the Enforcer Drone, and left the room after replacing it.  After exiting the room, he found Franks still outside.

“I sent them up to the Jefferies Tube.  After they are finished cleaning I’m sure that they’ll have a lot to answer for.”

Franks called a fireteam, noting they would be there within a few minutes.

Thuringer reported back to his terminal.

Abbasiov was around the corner.

“I’ll have one to you, sir,” Martin responded.

Smitty asked Martin about the cooling unit’s personnel, and they both agreed that Narcoline abuse was becoming a big problem in the navy. He and Smitty had an uneventful remainder of the day.

Martin submitted his after action report and they finally left for one of the ship’s mess halls.

He and Smitty talked about how good the ship’s food was compared to their last post.  They were posted at the same duty station, and had grown to love the Spartan mess hall of the Archimedes rather than the frilly Planetary Naval Station where they both were stationed last.  The topic quickly changed.

“Marty, what did you say your undergraduate degree was in?”

This inquiry was made by neither Smitty nor Thuringer.  It was Junior Lieutenant Rodriguez followed by Lieutenant-Commander Merwin.

“You and I need to go up to the command deck, right now.”

Merwin, Thuringer, and Rodriguez left for the bridge. Thuringer was puzzled at this development. They left for the elevator banks right outside the mess hall.

Thuringer’s curiosity got the best of him.

“We have been receiving strange transmissions, and our chief communications officer thinks its Dar-Shawn for some reason.  Since you actually speak it, I want an expert to confirm this.  This is a matter of national security.”

Thuringer nodded and they arrived on the bridge.  Bright touch screens were present all around the three officers as they entered the command deck.  The communications department was a short walk from the elevator bank.  The Captain was standing right by the kiosk where the communications officer kept playing a recording of the intercepted transmissions.

“Ensign, if this is Dar-Shawn, I’m counting on you to tell me exactly what it says.”

Thuringer read out loud what he heard.  He knew that he was correct.

Captain Cavaliri announced that the ship was changing course.

Thuringer had a feeling that he was about to see the fruits of his labor.  The Captain ordered the intelligence officers, along with Thuringer, into his ready room to the side of the bridge.

The room had a large observation window, a conference table, and a desk; this room was painted navy blue.  An odd gold trim was at the floor and ceilings.

“Fifteen minutes ago, we lost contact with the Naval Refueling Orbital Platform Echo 24; this platform is where our course is going to take us.  The platform was last posted at those coordinates.  I was hoping this was going to be a mere communication failure.  Yet, with that interception being confirmed as Dar-Shawn, I have a bad feeling that this is not a natural occurrence.”

The Captain looked at the two intelligence officers and pointed

The Captain then looked at Thuringer.

“Mr. Thuringer, you know this language.  Assist these officers until you are relieved.”

Buy The Book Here on Kindle or Paperback: Amazon