A long time ago in a galaxy without Disney acquiring Star Wars there was a character named Kyle Katarn. With Katarn came the Dark Forces series of First Person Shooters that began in 1995. The best game in that series was no doubt Dark Forces II: Jedi Knight and its expansion Mysteries of The Sith. These games were immersive single-player experiences and quite possibly are some of the very best first person shooters ever made. The story, the characters, settings, and the weapons told the story well. I reviewed this game a few years ago. Read the review here.

It is no secret that I like guns. Firearms are one of my favorite hobbies. I love Sigs and Smith & Wessons. I adore off-brand guns too. I love shooting! I enjoy taking a part a gun and cleaning it. Dark Forces II had some interesting weapons, and some of those weapons have close counterparts in real life. Let’s start with Kyle Katarn’s Bryar Pistol.

The Bryar Pistol is Kyle Katarn’s sidearm. It has a slow rate of fire. It is a boring weapon in the game. It is a hand-me-down according to many sources. This gun always reminded me of a Colt New Service revolver—an old police/military weapon from the mid 20th Century. Kyle’s sentimental nature to it reminds me of my old firearm flame, my Sig Pro.

This weapon is the commonplace stormtrooper’s rifle. It isn’t much of a rifle though. It is better at close ranges—the accuracy at distance only comes with its scope. The E-11 reminds me of a Glock or any striker fired pistol.

When the E-11 has its scope it certainly resembles the CAA RONI Carbine kit for Glocks to transform them into Carbines.

The bowcaster appears in the third level of Jedi Knight in earnest. It is found on and around the Katarn homestead. It reminds me of a lever action gun chambered in a magnum handgun caliber: .44 Magnum or .357 Magnum or something more exotic like .44 Alaskan. 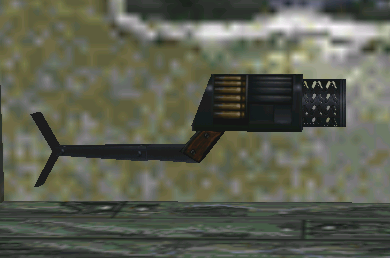 The repeater is commonly seen later in the came. It is carried by specialist stormtroopers or commandos. The repeater reminds me of the MP5. Jedi Knight was released in 1997. It is a 90s game. A 90s action icon fits it. The MP5!

The Rail Detonator and Concussion Rifle

Both of these heavy weapons could easily be identified with grenade launchers. In particular I thought the China Lake Grenade launcher from the hidden depths of Special Operations in Vietnam fit both of these late game marvels in Dark Forces II.